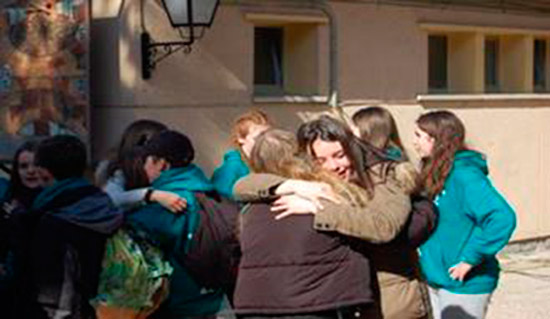 I would like to thank you both for organizing a thought provoking and inspirational annual conference.

I can attest that both the topics presented and the panel discussions are completely relevant to the teaching profession here in Spain.

The influential book discussed at the meeting, Flip the System UK: Changing Education from the Ground  Up (coming from the original Dutch version) could be well served in having a Spanish version  as well.

The concept that teachers need to be allowed to dedicate far more time to teaching over paperwork and that schools should be driven more from a teacher´s  ideal rather than a political and administrative ideal seems to be something obvious, yet rarely put into practice!

I work with both British and Spanish schools on educational exchange programmes and  have seen on many occasions how the hard work and enthusiasm invested by teachers in organizing something special for their students is often hampered by a lack of support and even disinterest by their senior leadership.

The majority of language teachers, both British and Spanish, organize school trips entirely through their own volition, putting in a great deal of time and effort to bring them about.

Why do they do this? There is rarely if ever any  extra pay or holiday time applied.

Well, they do it because they are passionate about their teaching and love to be able to do something special that can impact positively on the lives of their students.

The international language and culture exchange trips that we have carried out over the last six years have been very effective in generating enthusiasm in students for their chosen language during the trip abroad and for a time afterwards, but in most cases has not lead to an effective exchange programme.

As outlined in several of the topics discussed at the annual College of Teaching conference, teachers simply have little or no time to incorporate anything extra into their curriculum, no matter how beneficial it may be for their students, because of the excess of noneducational elements that they have to deal with both in and out of their classrooms.

We have had email exchanges denied  between students due to school or local county regulations regarding child protection. We have had cases that even official student school  emails, that can be monitored by the teachers have also been denied. The use of most modern social media , Facebook, Skype, etc has also been denied on occasion  due to similar regulations.

In a few cases only 19th century technology has been permitted, i.e physical letters being written and posted by the students.

All of the above are examples of some of the difficulties that school teachers face in trying to set up and maintain an effective exchange programme between similar age students, whereby students  can work with each other on learning each  other´s  language under the supervision of their teachers.

In a world where a number of elected leaders are showing that the world can easily move backwards rather than forwards I think the benefits of school age students from different backgrounds to meet and talk to each other is vital.

The programme “Teaching Maya´s Lesson: the beauty of diversity “   by Farhaam Patel  where he has organized visits and exchanges between British schools with mostly Muslim students and schools with mostly Christian or nondenominational student backgrounds is a wonderful and needed initiative.

We have seen the same thing  on our own international  retreats between a variety of different British schools; some mostly Muslim, some mostly Christian, non denominational, or from the inner city or the British countryside along with their paired  Spanish schools from diverse regions such as Madrid, Galicia, Cataluña and Valencia and all have proven to be a wonderful experience for everyone involved!

Farhaam´s initiative would be very applicable in Spain between Spanish students from different regions, especially where there is regional tension.

Seeing how politicians in both Spain and the UK seem to spend much of their time arguing ( I will not say like children because this would be an insult to children) and even bickering rather than moving issues forward,  it is high time that involved teachers  and their students, especially adolescents, take their own  initiatives to move the world forward.

Hats off to the brave students of Florida and their national March for their rights on the 24th of March!

I am copying in a number of British and Spanish teachers as well as educational organizations that I have worked with so that they can be aware of what The Chartered College of Teaching is promoting and I  encouraged them  to contribute their own experiences and perspectives or even become members to be able to reach more people in the educational field.

Meanwhile, as a picture is sometimes worth a 1000 words, I´ll leave you with a photo of what 5 days of getting to know someone from a different culture can result in.

Embracing my difference to be a better teacher – Abed Ahmed:

Video links to presentatiions at College of Teaching Conference